It was supposed to be the war to end all wars. For three years the United States resisted getting drawn into the conflict “over there”, but in April of 1917, after being repeatedly provoked and threatened, the U.S. entered the raging conflict. Ships carried 10,000 “doughboys” a day across the Atlantic Ocean to fight in Europe. Eventually 4.3 million Americans would serve their country in The Great War. One of them was a young Minnesotan named Kenneth Tyler. Almost a century later, Corporal Tyler’s family is still proud of his service.  By framing this collection of beautiful photographs and his original dog tags, they have preserved his memory to pass on to future generations. And for those who are interested, that would be a Harley Davidson 17J that Tyler is piloting. 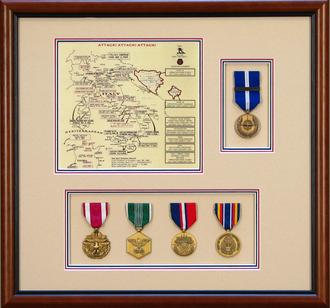 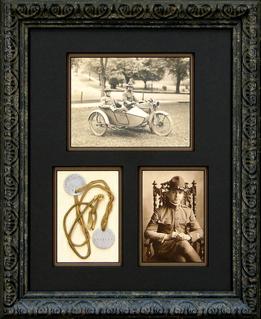 The 34th Infantry Division, know as the "Red Bulls", has a long and proud history. The display you see here includes the division motto and a map documenting various campaigns in which the unit has participated. It also includes the awards of one of the unit members. Featured is his NATO Medal issued by the North America Treaty Organization and authorized for wear by U.S. military members by the Deputy Secretary of Defense.

While the sand color mats were chosen as a representation of the environment where the campaign was waged, the red, white, and blue accents are a reminder of the patriotic nature of the mission.

On three different occasions we have had the honor of framing a piece of original wood recovered from the USS Constitution during the 1973-74 overhaul that got the ship ready to sail for the bicentennial celebration. Each of these projects was done for the same US Navy Captain as a gift to one of his children when they received their naval officer commission. Each was done differently but this is the latest.

If this is unfamiliar history for you, the USS Constitution is the world's oldest seaworthy commissioned naval vessel. It was launched on October 21, 1797. After engagements in the Quasi War

with France (1798-1801) and the Barbary Wars (1801-1805), the ship earned it's name "Old Ironsides" by defeating four British warships in the War of 1812. Those victories effectively dispelled the myth that the British navy was invincible. Today the Constitution promotes understanding of the Navy's war and peacetime roles using educational outreach, historic demonstration, and participation in public events. Staffed with a crew of 60 active duty US Navy personnel, it is a fully commissioned US Navy ship, but given it's mission, is open to visitors year round.

This framing presentation is designed to capture the spirit of the ship and reflect the heritage of this historic artifact. The section of oak recovered from the ship, the photograph, and the certificate explaining the artifact, are all set off individually with rough riveted iron banding reminiscent of the construction period. This same embellishment is used as an inner edge on the weathered oak frame. The frame is actually created with a veneer of antique wood recovered from 17th and 18th century beams originally used in old world homes and buildings. So the frame really is made of wood as old as the USS Constitution itself. The suede textured mat was chosen for it's color to match the natural canvas of the ship's sails.

We sincerely hope this framed piece is passed down to future generations within this US Navy family. And we thank every one of them for their service! 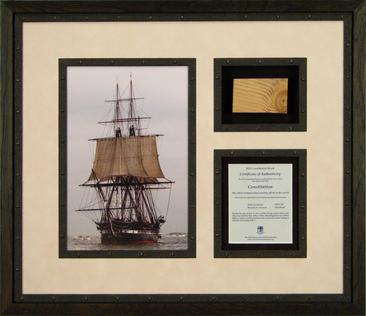