When you are a Packer Backer living in Minnesota Vikings territory, is there a better way to make a point about your team's success, and your involvement, than putting your Green Bay Packer's Stock Certificate, your Super Bowl program and tickets, and your picture taken at the game, into a shadowbox for everyone to see whenever they visit your home. Your Vikings fan friends may try to change the subject, but you know they can't avoid being jealous.

Jimmy Bedford was the 6th Master Distiller at the Jack Daniels Distillery where, for 20 years, he held what many felt was one of the most enviable jobs imaginable — making sure Jack Daniel’s Old No. 7 Tennessee Whiskey tasted just the way it had since 1866. He retired in 2008 but remained a popular attraction at the Black Hills Motor Classic, commonly called the Sturgis Motorcycle Rally. Unfortunately, the day after the close of Sturgis in 2009 Jimmy died of a heart attack at his Lynchburg, Tennessee ranch.

It was a sad day, especially for two Minnesota men who had, just days before his death, spent some time at Sturgis with the long time  guardian  of  the  Old  No. 7  Recipe.  They  had  their  picture 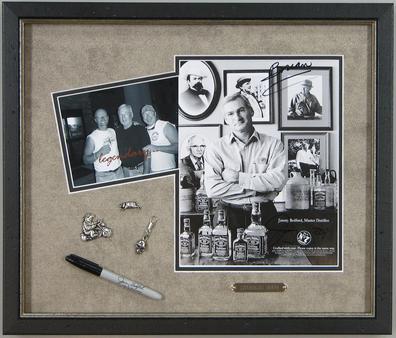 Spending a week in Fiji can be the trip of a lifetime. Having a great guide during your time there makes the experience even better. But when you shed tears while saying goodby, because your guide has turned into your friend, you know that you've created a memory that will last for the rest of your life. Having some of the keepsakes from the trip, including a picture of the two of you, along with the shark's tooth he gave you, framed as a memory display allows some of the details to be shared and remembered more clearly.

taken with him and Jimmy autographed a classic Jack Daniels ad for them. He even gave them the pen that was used to personalize the picture.

Obviously these items became instant treasures – mementos of an experience not to be repeated. Knowing how special they were, one man’s wife brought them to us for framing along with several small pins acquired at the same time. Here is the moment, frozen in time, that two men from Minnesota got together in the Black Hills of South Dakota to share a glass of Tennessee whiskey with the man who made it. 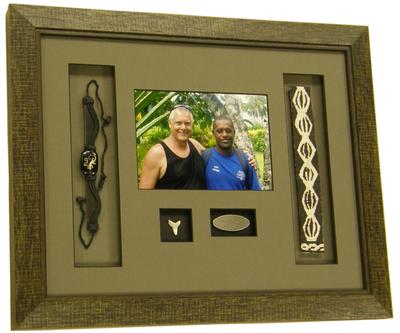 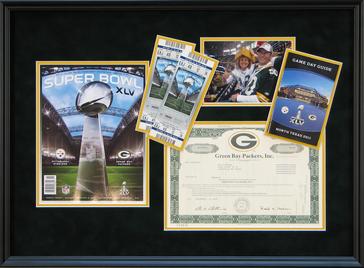