Being recognized by the President of the United States is a significant accomplishment. The certificate is intended to be framed, but wouldn't you want to keep it with the letter that actually has the country's chief executive's signature on it? And you could wear the lapel pin for a while but it could easily get lost or scratched.

So, here's a way to both preserve these valuable papers and show them off at the same time. This framing design is intended to look distinguish but not trendy. It should look as good on the wall 40 years from now as it does today. 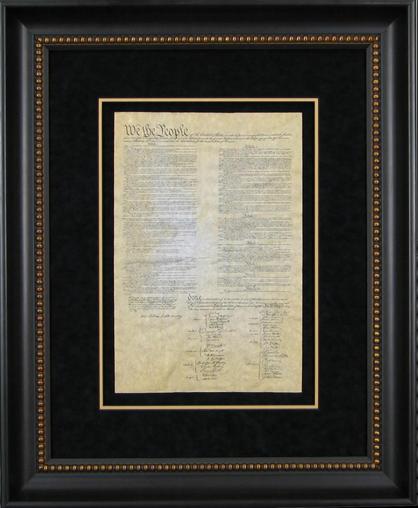 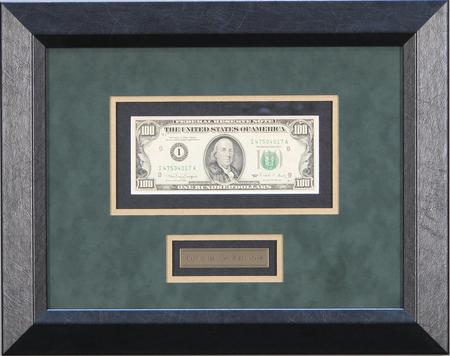 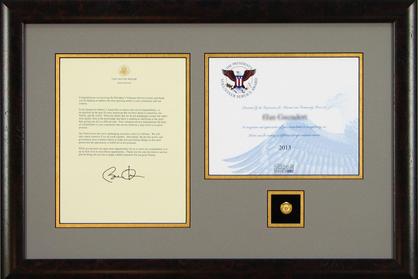 Last of the Stash

John Hoeft liked to sock money away. After he passed away, money was found tucked into all kinds of secret places – not much in any one spot but some here and some there. The family thought they had found it all. But ten years after his death an overlooked bible was opened to reveal three $100 bills, one designated for each of John’s three children. None of those children, all adults now, could bear to spend that one last gift from their dad, delivered so long after he was gone. The bills are now proudly displayed, as a reminder of a father’s love and thoughtfulness, in the homes of each of John’s children.

The significance of the first three words of America's conerstone document, the Constitution  of the United States of America, is unmistakable. "We the People" immediately establishes the country as a Republic where the citizens are the ultimate authority rather than a monarch or ruling class.

The original  Constitution is a very large document, almost 2½ feet tall by 2 feet wide. Often copies are reduced to 8½" x 11", the size of a standard piece of copy paper. But an original size copy, on parchment paper, that is formally framed, gives it a distinguished appearance and makes an impressive piece of wall décor.

This design uses stacked black suede mats with a definine gold foil separating edge to focus the viewer on America's founding document. The black 4" wide "Federalist" frame with traditional gold beading matches the period of the document and the style of the times.